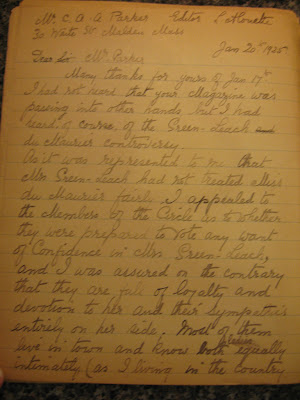 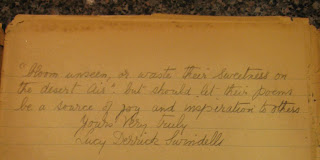 Jan. 20th 1925
Mr. C. A A Parker   Editor   L.Alouette??
30 Waite St. Malden Mass
Dear Sir. Mr. Parker
Many thanks for yours of Jan 17th. I had not heard that your Magazine was passing into other hands but I had heard of course of the Green-Leach and du Maurier controversy.
As it was represented to me that Mrs. Green-Leach had not treated Miss du Maurier fairly I appealed to the members of the Circle as to whether they were prepared to vote any want of confidence in Mrs. Green-Leach, and I was assured on the contrary that they are full of loyalty and devotion to her and their sympathies entirely on her side. Most of them live in town and know both ladies equally intimately, (as I living in the country) "bloom unseen or waste their sweetness on the desert air." but should let their poems be a source of joy and inspiration to others.
Yours Very Truly,
Lucy Derrick Swindells
This is one of those notes in which I'm not entirely sure the end goes with the beginning! The last page may actually be from another letter, but they were side by side in the notebook. At any rate, I'm assuming Mr. Parker was at one point the editor of a now defunct poetry magazine, which I couldn't find any references too. What's interesting is again Lucy broaching the subject of the infamous Green-Leach & du Maurier controversy! It's amazing to me that word of the controversy could have reached outside of Baltimore all the way to the offices of a magazine editor in Malden Massachusetts! - Carrie
Posted by Carrie at 11:01 AM 0 comments 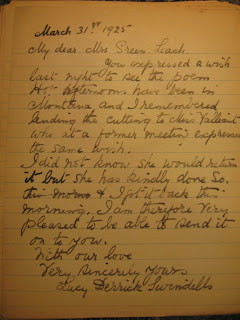 March 31st 1925
My dear Mrs. Green-Leach,
You expressed a wish last night to see the poem, "Hot afternoons have been in Montanta" and I remembered sending the cutting to Mrs.Valliant who at a former meeting expressed the same wish.
I did not know she would return it, but she has kindly done so. This morning & I got it back this morning. I am therefore very pleased to be able to send it on to you.
With our love,
Very Sincerely yours,
Lucy Derrick Swindells
One of the joys of reading Lucy's letters is reading and learning about the poems she references. I had a very clever & kind English teacher in 11th grade named Mrs. Little.. Mrs. Little opened up the world of poetry to me in a way I will never forget. She helped me to see the beauty, intelligence, humor, history, and wisdom that can be found in the genre of poetry.The poem Lucy shares today, "Hot afternoons have been in Montana" is written by Eli Siegel who was the founder of the philosophy Aesthetic Realism. The poem encompasses a variety of themes from love of the earth, to a history of people around the world, to the different meaning of poetry, to sexuality, etc... I wonder what Lucy and/or the poetry society would have thought of this worldly writing and it's many interpretations! - Carrie
Posted by Carrie at 8:00 AM 0 comments 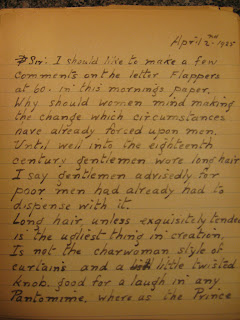 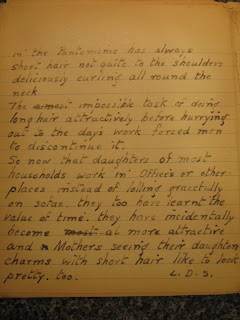 April 2nd 1925
Sir:
I should like to make a few comments on the letter "Flappers at 60" in this mornings paper. Why should women mind making the change which circumstances have already forced upon men.
Until well into the eighteenth century gentlemen wore long hair. I say say gentlemen advisedly for poor men had already had to dispense with it.
Long hair unless exquisitely tended is the ugliest thing in creation. Is not the charwoman style of curtains and a little twisted knob good for a laugh in any Pantomine. Where as the Prince in the Pantomine has always short hair not quite to the shoulders delicious curling all round the neck.
The almost impossible task of doing long hair attractively before hurrying out to the day's work forced men to discontinue it.
So now that daughters of most households work in offices or other places instead of lolling gracefully on sofas. They too have learnt the value of time. They have incidentally become most all more attractive and Mothers seeing their daughters charms with short hair like to look pretty too.
L.D.S.
This is the first letter we read that shares Lucy's strong opinions on the need for women to have short hair. One of her most well known (and published) letters to the Baltimore Sun contains a letter she sent to the King of England about his resistance to women cutting their hair. Today's letter contains wonderful language, I love that she mentions a "charwoman" - which is an older English term for a maid or cleaning woman. It is interesting to me how Lucy uses such generalizations about women such as... they don't have time to be lolling on sofas anymore... that long hair is only seen on maids or cleaning women (or therefore women of a lower class). The last sentence is rather telling as well. I wonder if Lucy initially cut her own hair when it became the style for her daughter to do so in the 20's. To see a picture of Lucy read the About page.   - Carrie
Posted by Carrie at 8:00 AM 2 comments 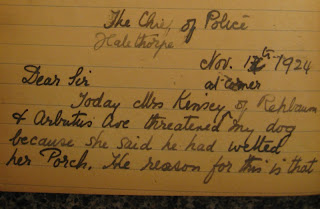 Dear Sir:
Today Mrs. Kensey at corner of Rehbaum & Arbutus Ave. threatened my dog because she said he had wetted her porch. The reason for this is that...


I hate I don't have the rest of this amusing letter. (I'd love to know Lucy's reasoning behind the dog "wetting" the porch!) This snippet makes me laugh no matter how many times I read it. Poor Lucy, she really could have used the advice of Judge Judy! - Carrie
Posted by Carrie at 5:00 AM 0 comments 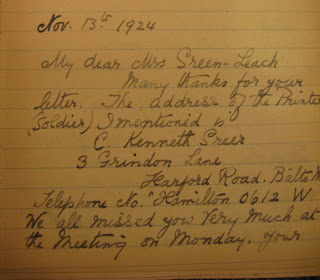 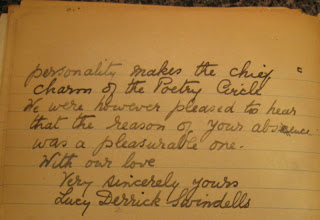 Many thanks for your letter. The address of the Printer (Soldier) I mentioned is:
C. Kenneth Greer
3 Grindon Lane
Learford Road, Balto M.D.
Telephone No. "Hamilton 0612 W"

We all missed you very much at the meeting on Monday. Your personality makes the chief charm of the Poetry Circle. We were however pleased to hear that the reason of your absence was a pleasureable one.

With our love
Very sincerely yours
Lucy Derrick Swindells 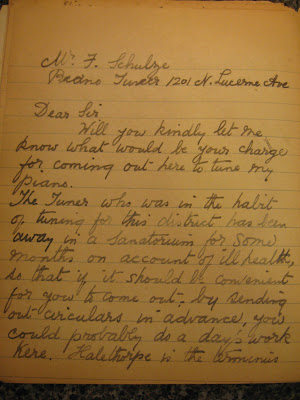 Will you kindly let me know what would be your charge for coming out here to tune my piano.
The Tuner who was in the habit of tuning for this district has been away in a sanitorium for some months on account of ill health, so that if it should be convenient for you to come out - by sending out circulars in advance you could probably do a day's work here. Halethorpe is the terminus of the Halethorpe & Wilkins Avenue Car Line of No. 9 Cars.

This is a very interesting letter to me in multiple ways. First either Lucy or her daughter Heather probably plays piano (Son Ian is deaf, so therefore, I'm assuming he most likely would not play piano.). In later letters Lucy references to Heather singing so she may play piano or Lucy may play for her. Secondly, I love Lucy's bold business sense in suggesting to the piano tuner that he could probably have an entire day's business if he sent flyers (or circulars) out prior to his visit. Lastly, it's interesting how Lucy describes to the Piano Tuner where she lives at the end of the letter ( I assume so he would know where to send circulars!). "Terminus" may refer to a train station or cable car station in Halethorpe MD area. I can't figure out if "No. 9 Cars" refers to trains or cable cars though. Have any thoughts?  - Carrie
Posted by Carrie at 5:00 AM 0 comments 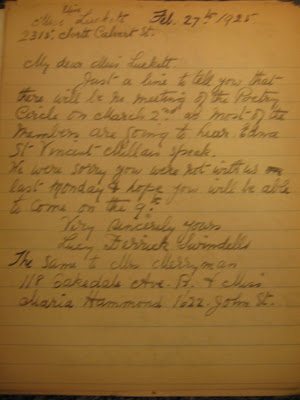 Just a line to tell you that there will be no meeting of the Poetry Circle on March 2nd as most of the members are going to hear Edna St. Vincent Millay speak.
We were sorry you were not with us last Monday & I hope you will be able to come on the 9th.

This is a good example of Lucy's responsibilities as secretary of the Poetry Circle. This letter acted as a template for notes she needed to send to several members. I wonder what she would have thought of MS Word software and Mail Merge technology! It's also fascinating to note that Lucy probably saw Edna St.Vincent Millay, a famous female American poet, speak live at a public event! - Carrie
Posted by Carrie at 8:00 AM 0 comments