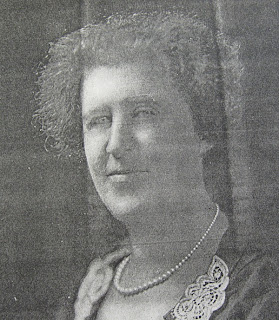 About 20 years ago I was at home during summer break from college. My friend Kristen came to visit me in SW, Va. from her home in Florida. Her mother was with her and she LOVED antique stores. During one visit to a particularly dusty and wonderful store full of treasures Kristen and I found an old traveling trunk full of old notebooks, newspaper clippings, letters, etc..

Neither one of us wanted to buy the trunk because we knew the other wanted it. We sat and read through the notebooks. It was fascinating. For two girls in their late teens reading about a woman who was too liberal for her time in the 1920's, we were fascinated.

Neither of us bought the trunk. Kristen left and went back to Florida. The next day I went and bought the trunk. Sorry Kristen! I was too intrigued to simply let it sit in that old antique store where people may never know or value the stories those notebooks held.

I went straight home and read each notebook. I put them in order as best I could. I shared them with my dad, close friends, my high school librarian (I was a nerd... I'll admit it!) And Mrs. Vail you are still the most awesome librarian ever!

One year I even went to Baltimore on a mission trip (the area where most of the letters are written from) and I visited the Baltimore Historical Society. I found a lot of information about Mrs. Lucy Derrick-Swindells and I was thrilled. I took all of my information back home. Organized my materials again... in the hopes one day I could write a book from them. The book hasn't happened yet, but I feel like it's time to share Lucy's story.

Mrs. Lucy Derrick-Swindells was (and still is) a force to be reckoned with. A woman with staunchly liberal beliefs in a time when women weren't encouraged in such things. Highly political, a fierce mother, and an often unhappy wife. Her letters encompass life for a mostly single woman & mother in the mid 1920's through the 1930's.

Lucy-Derrick Swindells has been appointed to compose the Pindaric Ode for Maryland Poets - 1930, Anthology of the International Writer's League.

Painted over one hundred portraits of the English aristocracy and notable people including Barbara, daughter of Sir William Campion, Governor of Western Australia and great-granddaughter of Viscount Hampden, first Speaker of the British House of Commons; The Chancellor of Edinburgh Cathedral, the late Rev. Canon Cowley-Brown, etc.

While living in Edinburgh, Mrs. Derrick-Swindells exhibited portraits regularly at the annual exhibitions of the Society of Scottish Artists.

After arriving in America in 1921, she became Chairman of Committee of the Arts Club of Elizabeth, N.J. and painted portraits of the prominent women of Elizabeth including Mrs. Willet Martin, President of the Women's Club.

The Reminiscences of the Artist were published weekly by by the Elizabeth Sunday Times during the year and and a half that Mrs. Derrick-Swindells lived there.

Since coming to Baltimore in 1923 she has painted the portrait of the late Dr. Peregrine Wroth, presented to him on the fiftieth anniversary of his Rectorship of the Church of the Messiah, Mrs. William F. Rienhoff, daughter of Dr. Hugh Hampton Young of Johns Hopkins, Mrs. Maria Briscoe Croker, President of the Maryland Branch of the American Poetry Circle, and many others.

Mrs. Derrick-Swindells has lately become President of the Baltimore Branch of the American Poetry Circle.