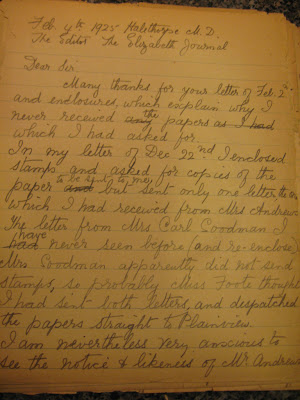 Feb. 4th 1925
Halethorpe M.D.
The Editor of the Elizabeth Journal

Many thanks for your letter of Feb. 2nd and enclosures, which explain why I never received any the papers as I had which I had asked for.

In my letter of Dec 22nd I enclosed stamps and asked for copies of the paper and to be sent only one letter, the one which I had received from Mrs. Andrews. The letter from Mrs. Carl Goodman I had have never seen before (and re-enclose). Mrs. Goodman apparently did not send stamps, so probably Miss Foote thought I had sent both letters, and dispatched the papers straight to Plainview.

I am nevertheless very anxious to see the notice & likeness of Mr. Andrews... 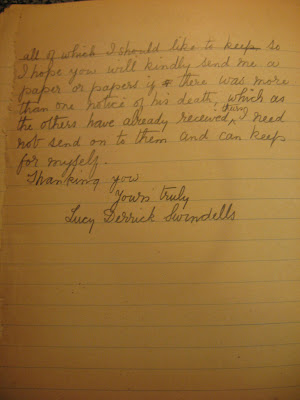 all of which I should like to keep so I hope you will kindly send me a paper or papers if there was more than one notice of his death, which as the others have already received theirs I need not send on to them and can keep for myself.

Carrie's Notes: This is an interesting note from Lucy to the editor of the Elizabeth Journal. Somehow there was a mixup in the previous notes sent requesting copies of an obituary or story written about the former Rector Mr. E. H. J. Andrews. It sounds as if the paper knew Lucy wrote both letters (which makes sense as her handwriting is so distinguished and recognizable) and sent all copies to her instead of passing them along to Mrs. Goodwin. Lucy's letters often show her ability to look past her own flaws in order to not accept blame for mistakes.

Email ThisBlogThis!Share to TwitterShare to FacebookShare to Pinterest
Labels: 1925, daily life in the 20's, E.H. J. Andrews, letters to the editor, Mrs. Carl Goodman, writing for others 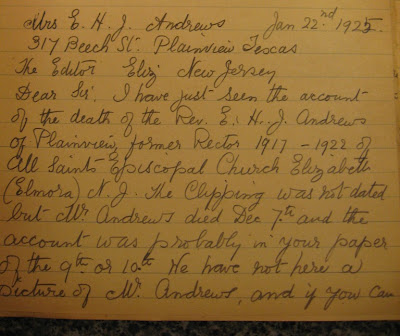 Dear Sir: I have just seen the account of the death of Rev. E. H. J. Andrews of Plainsview former Rector 1917-1922 of All Saints Episcopal Church Elizabeth (Elmora) N. J. The Clipping was not dated but Mr. Andrews died Dec. 7th and the account was probably in your paper of the 9th or 10th. We have not here a picture of Mr. Andrews, and if you can... 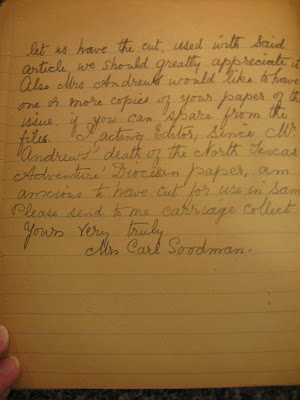 let us have the cut used with said article we should greatly appreciate it. Also Ms. Andrews would like to have one or more copies of your paper of the issue if you can spare from the files. I, acting editor (since Mr. Andrew's death) of the North Texas Adventure Diocesan paper, am anxious to have cut for use in ("Sam?"). Please send to me carriage collect.

Carrie's Notes: Located in the notebooks are several letters that Lucy must have penned for other people. I don't know how Lucy knew Mrs. Goodman, although I believe she may have known her husband when she lived in Elizabeth, New Jersey (before she moved to Maryland).  I don't know if Lucy penned these letters as a favor to friends or charged as an additional business venture.