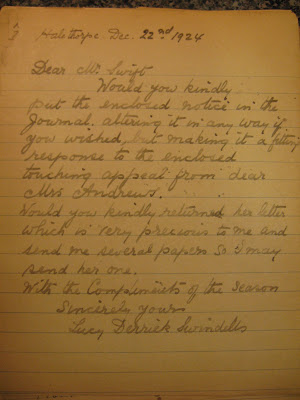 Would you kindly put the enclosed notice in the journal. Altering it in any way if you wished, but making it a fitting response to the enclosed touching appeal from dear Mrs. Andrews.

Would you kindly return her letter which is very precious to me and send me several papers so I may send her one.

With the complements of the season,
Sincerely yours,
Lucy Derrick Swindells 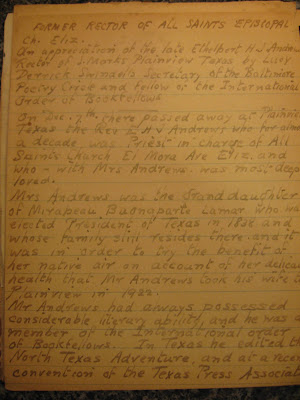 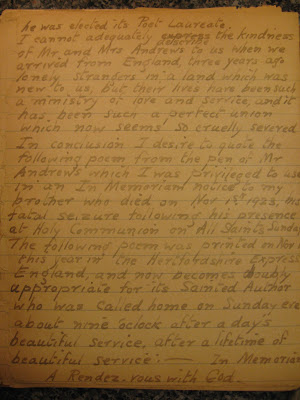 FORMER RECTOR OF ALL SAINTS EPISCOPAL

Ch. Eliz.
An appreciation of the late Ethelbert H.J. Andrews, Rector of S.Marks Plainview Texas
by Lucy Derrick Swindells, Secretary of the Baltimore Poetry Circle and fellow of the International Order of Bookfellows.

On Dec. 7 there passed away at Plainview Texas the Rev. E.H.V. Andrews who for almost a decade was Priest in Charge of All Saints Church El Mora Ave Eliz. and who - with Mrs. Andrews was most deeply loved.

Mrs. Andrews was the granddaughter of Mirabeau Buonaparte Lamar who was elected President of Texas in 1838 and whose family still resides there and it was in order to try the benefit of her native air on account of her delicate health that Mr. Andrews took his wife to Plainview in 1922.

Mr. Andrews had always possessed considerable literary ability and he was a member of the International Order of Bookfellows. In Texas he edited the North Texas Adventure, and at a recent convention of the Texas Press Association he was elected it's Poet Laureate.

I cannot adequately express describe the kindness of Mr. and Mrs. Andrews to us when we arrived from England, three years ago (1921), lonely strangers in a land which was new to us, but their lives have been such a ministry of love and service and it has been such a perfect union which now seems so cruelly severed.

In conclusion I desire to quote the following poem from the pen of Mr. Andrews which I was privileged to use in an In Memoriam notice of my brother who died on Nov. 1, 1923, his fatal seizure following his presence at Holy Communion on All Saints Sunday.

The following poem was printed on Nov. 1 this year in the Hertfordshire Express England and now becomes doubly appropriate for it's Sainted Author who was called home on Sunday eve about nine o'clock after a day's beautiful service, after a lifetime of beautiful service:

- In Memoriam: A Rendezvous with God. -

Sadly, the poem itself is missing. We learn a lot about Lucy from this lengthy tribute. She arrived from England 3 years earlier, this family was incredibly kind and helpful to her family. Her brother (Ellis Raves) died in November of 1924.  Lucy is definitely close to several members of the Andrews family which we will read about more in later letters - Carrie
Posted by Carrie at 8:00 AM