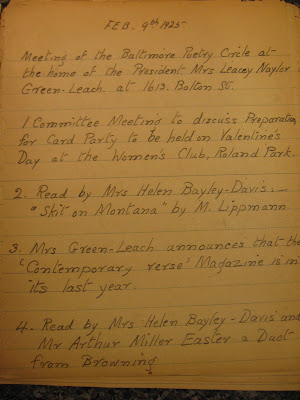 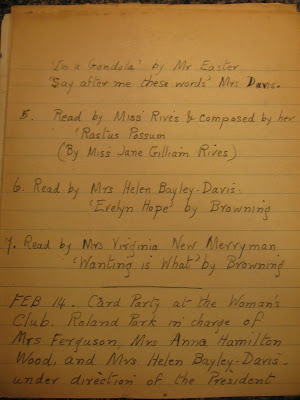 FEB. 9th 1925
Meeting of the Baltimore Poetry Circle at the home of the President Mrs. Leacey Naylor Green-Leach at 1613 Bolton Ave.
1. Committee Meeting to discuss Preparation for Card Party to be held on Valentine's Day at the Women's Club, Roland Park.
2. Read by Mrs. Helen Bayley-Davis. "Skit on Montana" by M. Lippman.
3. Mrs. Green-Leach announces that the "Contemporary Verse" Magazine is in it's last year.
4. Read by Mrs. Helen Bayley-Davis and Mr. Arthur Miller Easter a Duet - from Browning.
"In a Gondola" by Mr. Easter
"Say after me these words" Mrs. Davis
5. Read by Miss Rives & composed by her: "Rastus Possum" by: Miss Jane Gilliam Rives
6. Read by Mrs. Helen Bayley-Davis: "Evelyn Hope" by Browning.
7. Read by Mrs. Virginia New Merryman: "Wanting is What" by Browning.
FEB 14 - Card Party at the Women's Club. at Roland Park
In Charge of Party: Mrs. Ferguson, Mrs. Anna Hamilton-Wood, and Mrs. Helen Bayley-Davis -- under direction of the President.
I love these notes taken by Mrs. Lucy at a Poetry Circle Meeting! The members were obviously fans of Robert Browning. I don't know a lot about how the meetings were planned, but it would be interesting to know if certain poets were highlighted each month. Members often shared their own poetry as well. When I visited Baltimore one summer during college I looked up the streets that were mentioned in Lucy's letters. Amazingly where I stayed that summer was right in the middle of downtown Baltimore, with the streets of Lucy's friends literally surrounding me. It was haunting in a way. - Carrie
Posted by Carrie at 8:00 AM