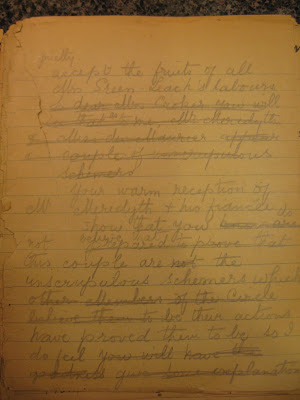 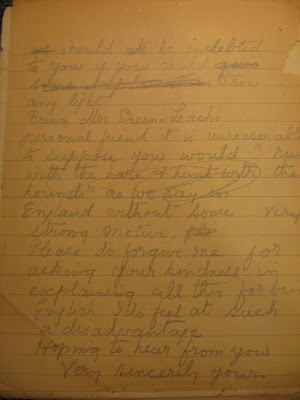 Partial undated letter probably from late 1925 - early 1926
(to Mrs. Croker - another member of the Poetry Circle -- Carrie)
...quietly accept the fruits of all Mrs. Green-Leach's labors so dear Mrs. Croker you will see that as to me, Mr. Meredyth and Miss de Maurier appear a couple of unscrupulous schemers...
Your warm reception of Mr. Meredyth & his fiance show that you do not believe that this couple are the unscupulous schemers which other members of the Circle believe them to be their actions have proved them not to be so I do feel you will have the goodness give some explanation we should all be indebted to you could give some explanation to throw any light..
Being Mrs. Green-Leach's personal friend it is unreasonable to suppose you would "run with the hare & hunt with the hounds" as we say in England without some very strong motive. Please do forgive me for asking your kindness in explaining all this for being English I do feel at such a disadvantage.
Hoping to hear from you.
Very Sincerely Yours,
Lucy Derrick-Swindells
This letter from Lucy to Mrs. Croker, which is trying to delve deeper into the Green-Leach & du Maurier controversy is classic "Lucy." I love how sweetly she comes across as simply being nosy and is dying to figure out what happened within the Circle to cause Miss du Maurier to leave! I love the false assumption that because she's British she's at a social disadvantage to understand the ways and means of Americans. This whole letter could be summed up as Lucy saying to Mrs. Croker, "Would you just tell me WHAT is going on?" But that would be too brutally American! - Carrie
Posted by Carrie at 6:32 AM